The ﬁrst church at Croydon was a constrained monastic chapel: the centre of prayer for a cloistered religious community. Built in 1937, it had a seating capacity of 100. As the suburbs of Melbourne grew to surround the site, this chapel became too small to accommodate the increasing congregation and renovation and extensions were planned. As a result, the monastic chapel has now been incorporated into a new parish church with a 520-plus overﬂow capacity.

Through a series of workshops, a client brief was developed by the parish community and subsequently presented to architects Graeme Law and Associates P/L in a formal parish ceremony. The brief presented a decisive picture of the type of space required for worship along with a basic planning concept: the expansion of the chapel into the central enclosed cloister while sympathetically conserving the original façade of the monastery complex.

The new church is next to invisible upon arriving at the site. The point of entry remains the portal of the original chapel but the nave of this chapel now only serves as an enlarged narthex or entry and greeting space. The new church nave and altar are only visible looking through this space where fully glazed walls and curved veneer plywood ceilings provide an almost seamless transition between the two: the constrained heritage monastery building and the new worship space for a broad and active community. 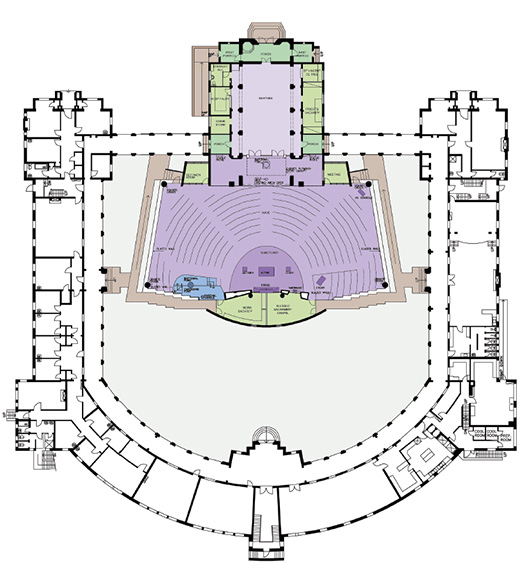 The church and its evolution contrast the changing forms of worship before and after the reforms of Vatican 2 in 1962. These saw the formality and strong hierarchical arrangement of older church forms, with their separation of clergy and congregation, broken down to an arrangement more readily reﬂecting an open relationship in religious celebration. The linearity of the church seen in the plan of the chapel is gone in the new church, replaced by a semicircular arrangement that encloses the main focus of the sacrament and allows each person a clear line of sight to the celebrant. This effectively exploits an arrangement common to theatres. The focus of attention, the priest and the sacrament, is in the centre. Radial and tiered seating focuses attention both on the sacrament and on the wider community. People are effectively within one another’s sightline across the curved arrangement. This brings the congregation closer to the celebration of Mass and to other members of the community. Pragmatically, it also improves the acoustics in the space.

While the two spaces contrast strongly in plan, the architects have moulded the ceiling and roof form in the new church to conform with the old. So, the strong lines of the roof of the original nave continue through the extended building to lead the eye to the new altar and the sweeping cross and Christ ﬁgure above it. This disassociation of plan and ceiling form is being used increasingly, as it allows the cruciform and nave arrangement of the traditional church to be retained above new ways of arranging the congregation.

Timber is a traditional material in religious architecture and in Australia, it has been widely used in ceiling and exposed roof structures, in furniture and in speciﬁc religious ﬁttings, such as carvings.

In this ‘combined’ church, it is used in a number of ways. The ceiling and roof structure of the original church features a series of king post trusses with an exaggerated design to suit the style of the original complex. They support expressed purlins and a stained plywood ceiling. The original pews are also wood.

In the extension, timber is used throughout the ﬁnishes and ﬁttings. The curved ceiling over the wings of the new church nave are plywood faced with slip matched Blackwood veneer. Fitted in overlapping layers to a metal subframe, it is ﬁxed with exposed hexagonal headed black screws in a regular pattern. The external curved sofﬁt is painted waterproof ply. Internally, the ceiling accommodates downlights and other services.

The Victorian ash pews are perhaps the major element in the nave, at least when it is empty of its congregation. Custom designed by the architects and manufactured to detail by Fallshaw & Sons, Victoria , the regular pale colour and grain, and rectilinear arrangement of the wood in these long bench seats contrasts with the more active grain and darker colour of the ceiling.

They also deﬁne the curved arrangement of the congregation, again in contrast to the lines and shapes of the ceiling. The pews have glue laminated seats, backs and legs. The front edge of the seat is rounded, while the top of the back returns in an inverted L-shape. This stiffens the long back piece, and provides a guide for the incoming parishioner.

The architects designed all the interior furniture and liturgical artwork throughout, including altar, ambo, font, tabernacle refurbishment and other pieces. Several of them are timber items. The priest’s chair is solid Blackwood assembled in a design reminiscent of the designs of Macintosh. The back verticals taper up from the bottom rails while most of the connections are mortise and tenon joints. A rail at the top of the chair back passes through the vertical and is expressed on either side. The rails are cut to shape to accommodate the upholstered seat and back. A memorial timber cabinet, designed by the architects, was made by Bill Neagle of Neagle Bros.

The church also features religious elements and carvings in a range of styles. A simple cross made from recycled Ironbark supports the Christ ﬁgure. This is carved from jeluton – a south east Asian hardwood - by Leopoldine Mimovich, it is in a sweeping modern style. Other timber sculptures of the saints in the church by sculptor Eva Schubert have the proportion and forms of more traditional gothic carvings.

The changing face of worship is represented effectively in the evolution between old and new design and presentation in this building. What was once a monastery – literally a controlled society – has become a rich, vibrant and diverse community of worship. This change is represented in the building itself, where traditional timber elements have been reinterpreted. Visitors enter the original building, where the dark ceiling and linear form evoke a constrained, sombre atmosphere. Beyond this, they discover a very different ambience, with the colour and light of the new wing, bright and welcoming. This evolution is especially true of the pews: the new installation maintains the previous straight shape of the old but the fresh, light timber and curved layout represents the change in the perceived relationship of the church to its community.

The contrast of two ceiling types is another obvious expression of this change. Looking up to the ceiling of the original nave, one can see an example of a king post truss arrangement with its mortise and tenon joints. The complexity of this traditional arrangement and form of architectural expression contrasts with the simplicity and reﬂection of the natural light of the wood wave ceiling in the newer part of the building. The form of this ceiling allows people to take in the views to the surrounding cloister but compels them by the ﬂow of the waves further back inward towards the altar and the centre of the congregation.

The building combines elements of two forms of worship – two distinct periods – in an elegant way. This pastiche of styles employed is not dogmatic or uniform but is rather contemporary and practical. While this may draw criticism from some quarters, it is nevertheless a realistic architectural expression of the diverse and active community that it serves.